The Macro-Environment of Austin, TX

The Austin Metropolitan Area has experienced consistent population growth over the past four years, with a total increase of 1.9% YOY in 2021. This trend is expected to continue into 2022, as the city remains a popular choice for domestic migrants, a phenomenon responsible for roughly 59.4% of the city’s growth from 2010-2020. Furthermore, the prestigious University of Texas at Austin continues to attract young talent, provide a stable source of employment, and produce highly educated members of the workforce. 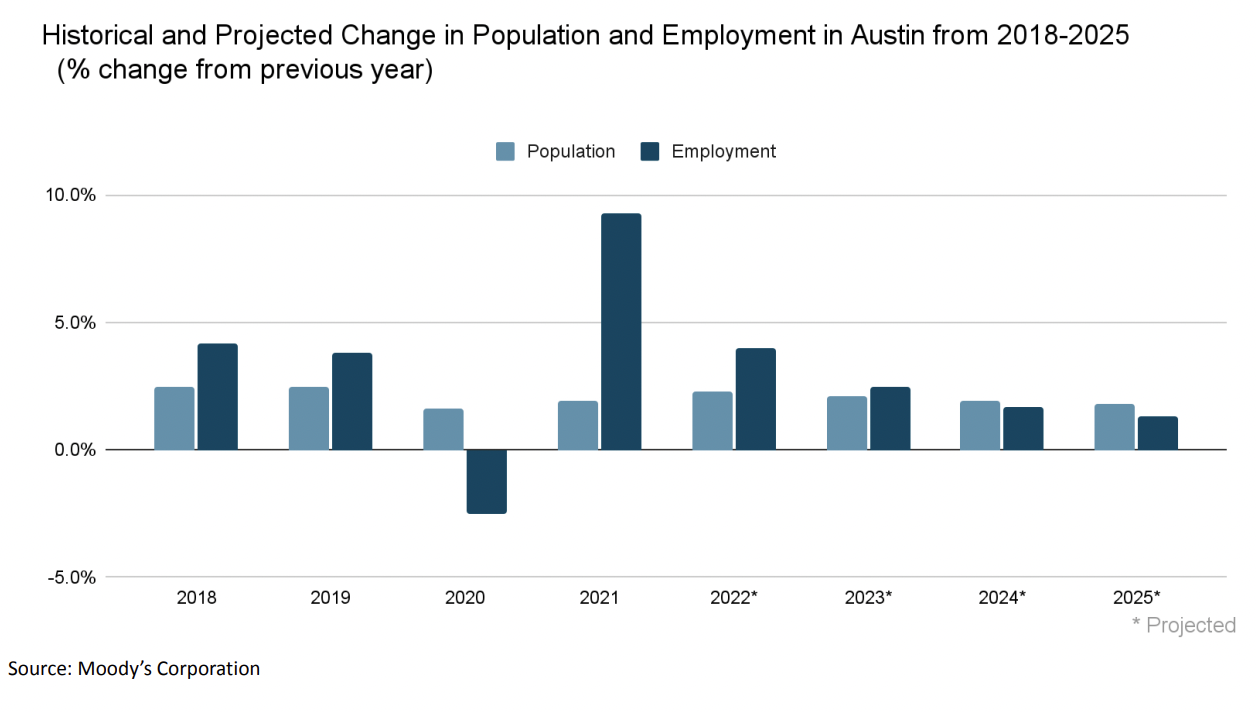 Employment figures for the area have been similarly impressive. The Austin Metropolitan Area hit an unemployment rate of 2.5% in April 2022, compared to 4.3% a year earlier and 2.6% in February 2020 (pre-pandemic). This makes Austin one of the few metropolitan areas in the United States to fully recover from job losses inflicted by the coronavirus. With such a tight labor market, it is unsurprising that the rate of growth for employment is projected to, although remain positive, slow down over the next few years.

While Austin consistently boasts an incredible overall job market, the greatest expansions in Austin’s core have been in the ever growing technology and information sectors. In 2021 alone Austin saw a remarkable 15% boom in these sectors growing from a labor force of 41,300 to 47,500. This trend is beginning to slow, as is expected with the total employment rate, though there is still growth potential that exists. In the first 5 months of 2022 alone, the information and technology sectors grew by about 2.5%. 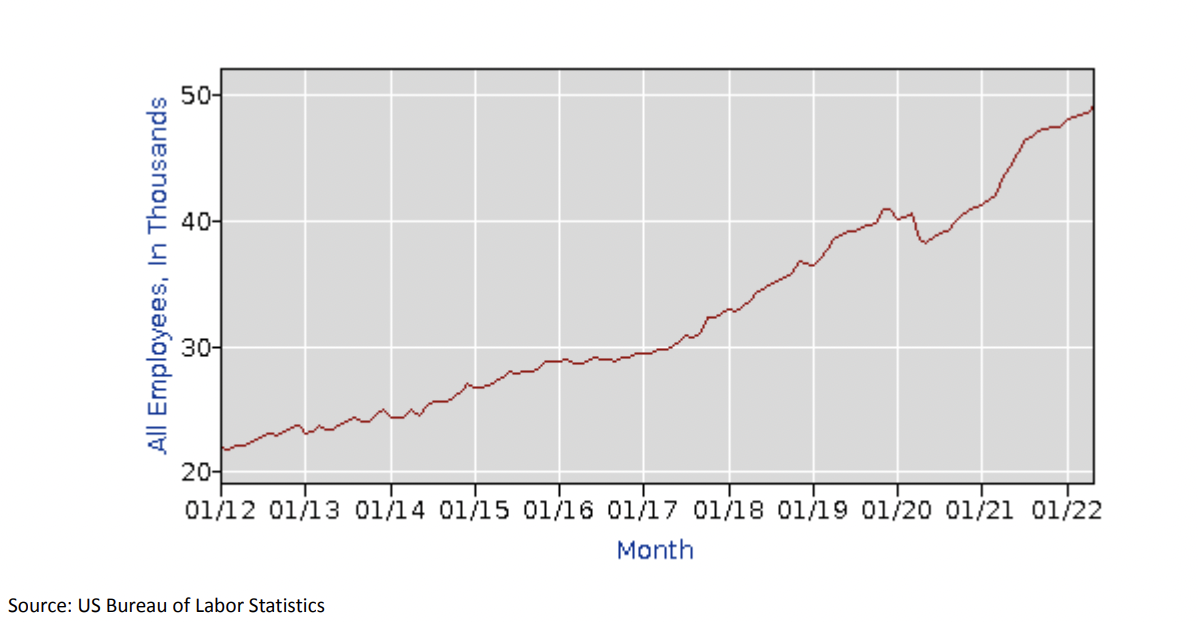 Notably, this trend is likely due to some of the world’s largest fortune 500 companies pledging billions of dollars into developing their businesses in the Austin Metro area. Companies such as Google, Amazon, Facebook, and Oracle have submitted multi-million dollar expansion plans in the area. According to the Austin Chamber of Commerce, in the upcoming year about 100 companies are on track to either relocate or start-up, and around half of them are IT-related. In comparison to similarly populated cities like Seattle or Boston, it becomes clear just how significant this number is. These cities only host 606 and 804 total tech companies, respectively, meaning that Austin's 50 new IT companies entering this year are relatively noteworthy.

In a tweet written by billionaire entrepreneur Elon Musk he states:

Additionally, Apple Inc. has recently broken ground on a $1 billion dollar new campus in the Austin area. The behemoth of a 3 million square foot area will be home to 5000 employees initially with the capability of hosting 15,000 when it is at full force. This campus is expected to be operational in late 2022.

The path that Austin continues to go down in the massive technology sector is clear and evident. In the future, it's likely that we will see this city continue to embrace its nickname as “Silicon Hills”, a play on the high-tech market and culture of “Silicon Valley”. Overall, it appears that Austin is not finished growing, as it remains a top city for people to live and work in, and with tech giants like Amazon and Tesla announcing major expansions for the near future, it is no wonder why.

Wealth in Austin – 25% above US average 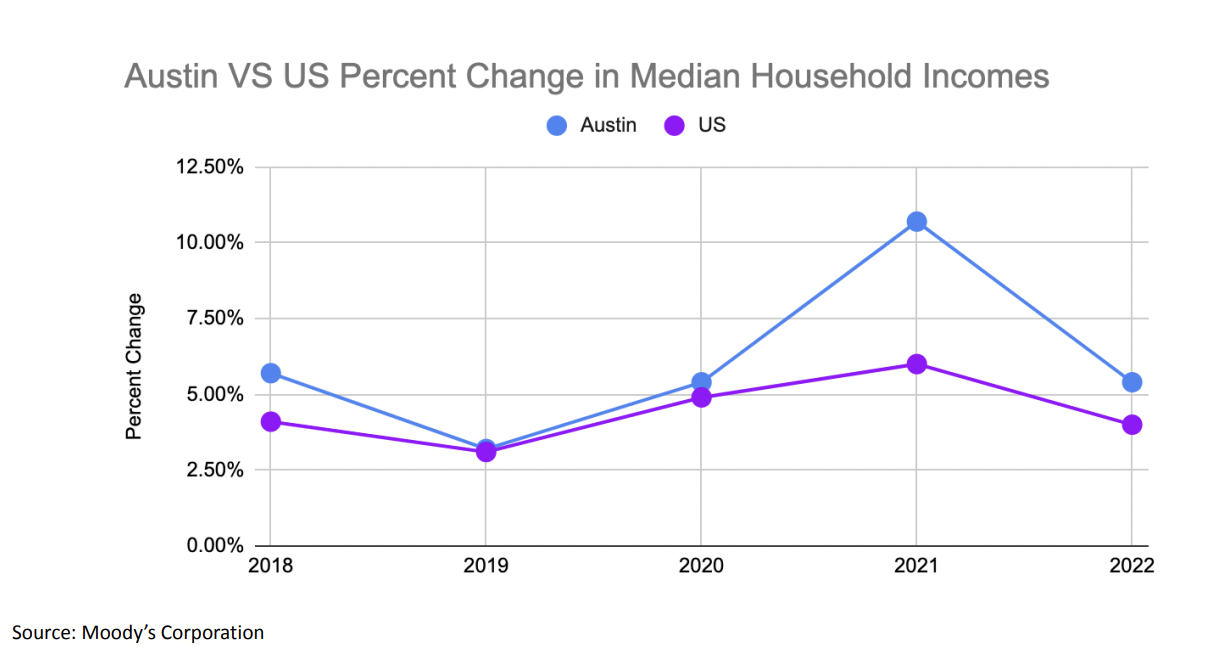 Perhaps it's difficult to paint a picture of a thriving economy based on single-year figures. When looking at Austin over time, it's clear that its people are making more money. Year-over-year the percent change in Austin's household income is beating out that of the national average. In 2022, Austin’s median household income is expected to grow by 5.3%, whereas the national average is only intended to grow by 4%. Though many possible causes for this likely exist, it's important to remember that Austin is continuing to become home to more high-level tech and information jobs. Often, these jobs come with lofty paychecks.

"While Austin consistently boasts an incredible overall job market, the greatest expansions in Austin’s core have been in the ever-growing technology and information sectors"

Additional reasons for the souring income levels of Austin is because usually income is directly correlated with education levels. Within Austin's metro area 46% of the population possess a Bachelor's degree or higher, compared to 31% nationally. Since a higher number of citizens hold an upper-level degree, their income is also likely higher.

Austin Remains Affordable, but for How Long?

Despite a history of dramatic expansion, the cost of living in Austin is only 1% higher than the national average, with one considerable exception: housing. In May 2022, the median sale price for a home in the Austin Metropolitan Area increased dramatically, 16% over the past year. This has pushed Austin's housing expenses 12% higher than the national average according to payscale. 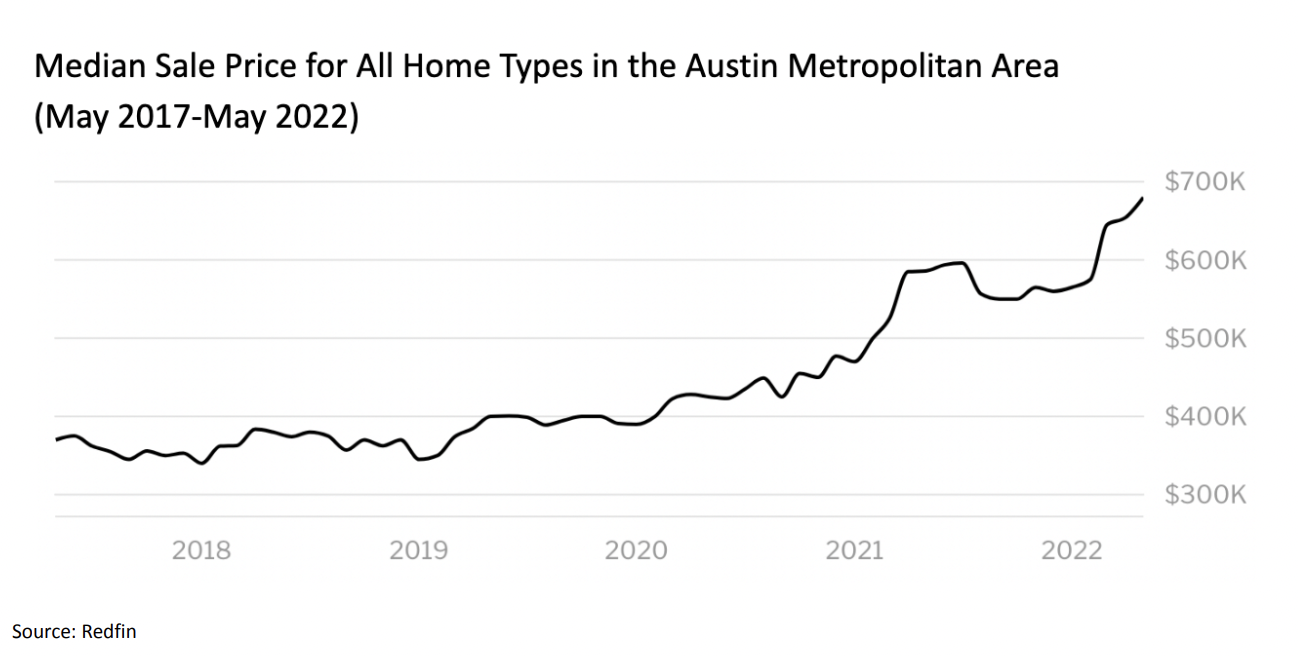 To make matters worse, inflation has presented a new challenge for affordability in the city. The U.S. Bureau of Labor Statistics’s CPI-U, an economic index that measures the monthly change in consumer prices paid by urban consumers for a “basket of goods”, showed a 9.3% YOY increase in April 2022 for all items in the West South Central States (a Census Bureau-designated region composed of Arkansas, Louisiana, Oklahoma, and Texas), 100 basis points higher than the average for all U.S. cities. More specifically, food prices increased by 10.2% and energy prices increased by 33%, both outpacing the U.S. city average.

It is difficult to pinpoint the source or combination of sources responsible for Austin’s inflationary pressures (increased consumer demand, supply chain issues, lack of new housing, etc.) and it is, therefore, hard to say for how long these challenges might persist. For the moment, Austin is a far cheaper alternative to large coastal metropolitan areas like New York City and San Francisco, but investors should be wary that this may not last.

It is becoming hard to ignore the dramatic rise of housing costs in Austin. In the past five months alone, Austin has seen some relatively large increases in rent, totalling around 4.4%, with all fourteen of the metros submarkets showing positive movement in asking prices. This metric is semi-consistent with the ten-year running average increase of rental rates of around 5.0%. But that's not to say there is no improvement in the future ahead. Austin is under major construction and is expected to add 9,566 units to the Austin metro area. As the supply of these apartment units begins to come to fruition, ideally the rent rates will begin to slow and level off finding a natural market equilibrium. Likewise, since Austin has seen a massive influx of workers to its new job sectors, supply has simply been unable to keep up with demand.

The start of 2022 saw this figure drop an additional 70 basis points, with April having the lowest level of vacancy seen in Austin since March 2014. This decrease can be attributed to continued high absorption and a lack of new unit construction in Q1 2022, but this is expected to change before the end of the year. From the start of Q2 2022 to the end of the year, Moody’s projects that 9,566 competitive apartment units will be added to the metro, while net total absorption is estimated at 5,899 units. The vacancy rate is, therefore, expected to hit 5.6% in 2022, a 90 basis point increase.

To account for variability in the housing market, Moody’s further projects two downside scenarios of increasing severity which show a 6.9% and 7.0% vacancy rate respectively. Regardless, all three projections show Austin’s vacancy rates stabilizing towards the low 5.0% range in the long term and within half a percentage point of the Southwest average by 2025.

Absorption Hits New Highs as Completions Race to Keep Up

In 2021, construction figures in Austin were fairly lackluster. Market absorption hit an impressive 8,748 units, nearly 36% higher than the 10-year average at that point, and yet completions for the year lagged behind at 6,644 units. In 2022, absorption is expected to continue at even higher levels, but a major rebound in construction activity is expected. This indicates high demand in the market from investors. 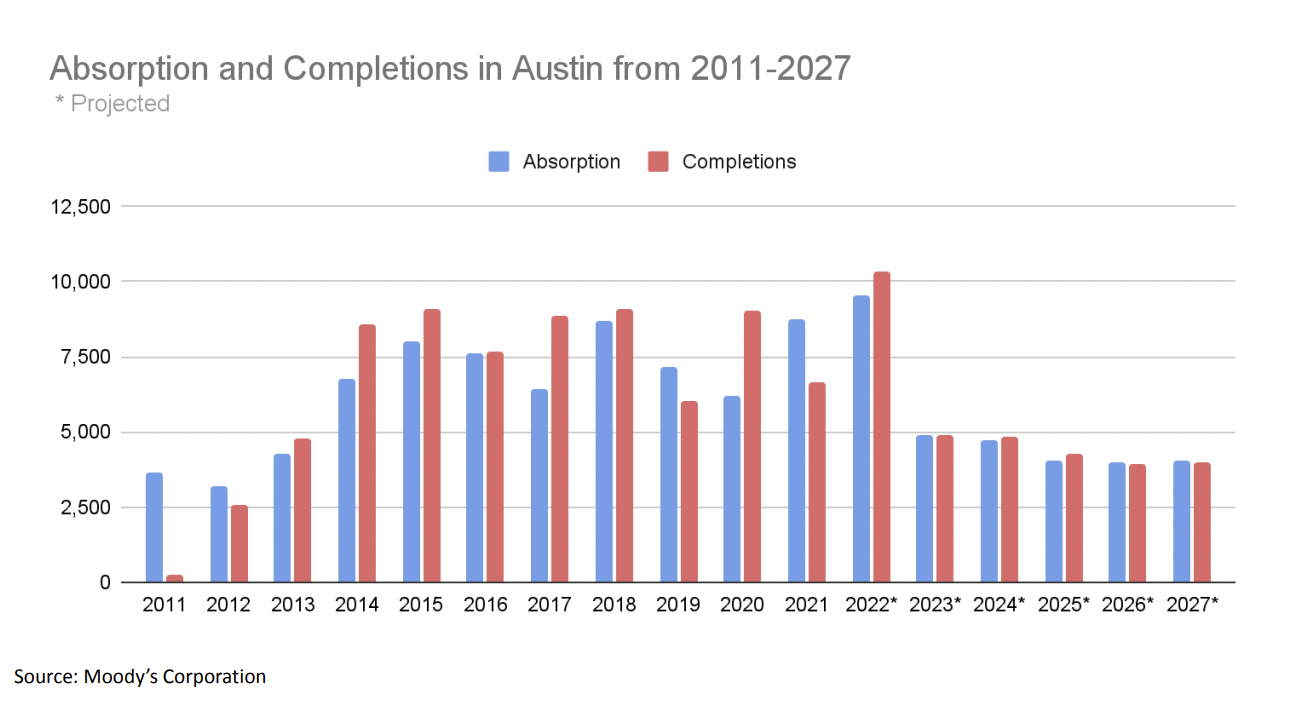 From that point on, Moody’s projects the ratio of absorption to completions to be at or very close to 1-1, which should contribute to a stable vacancy rate from 2023-2025.

Valuation is Starting to Cool Off 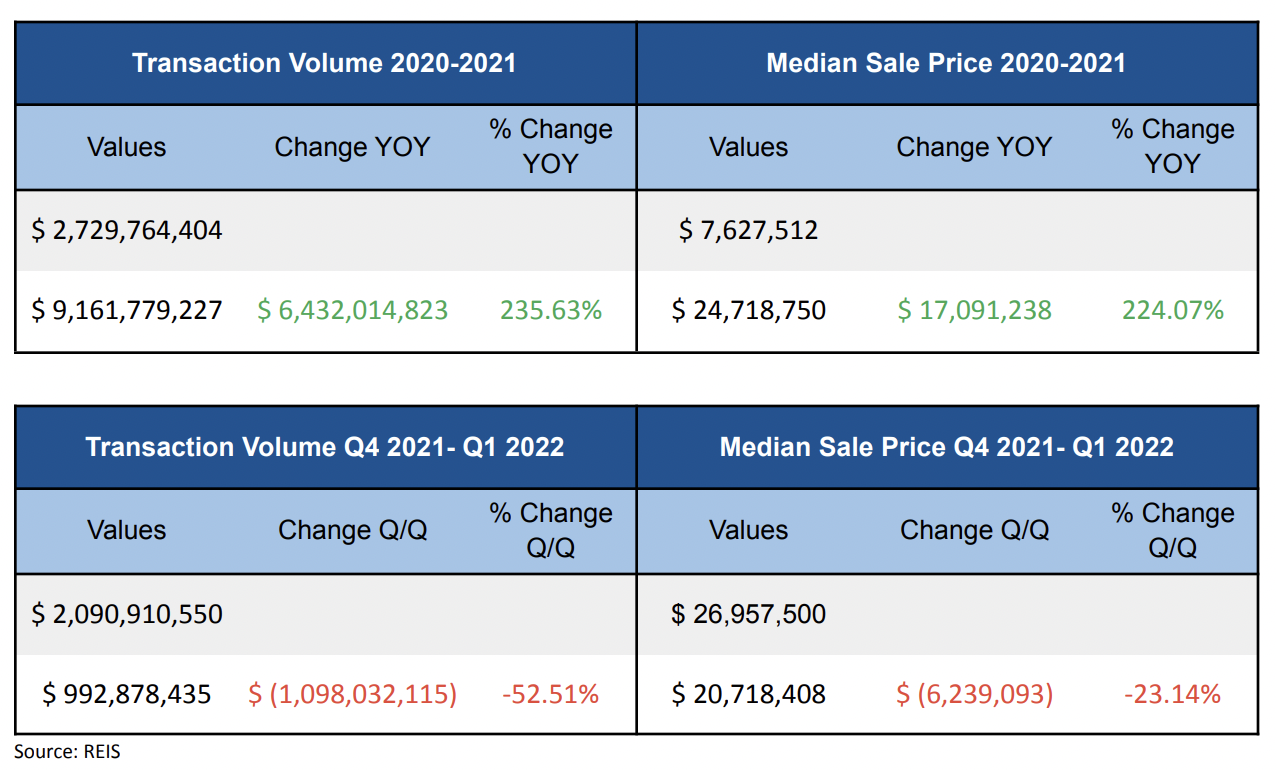 ﻿David is an analyst at SeeCares. He researches and analyzes CRE data on a local, regional, and national level. He closely follows market trends and evaluates the conditions in the commercial real estate industry. 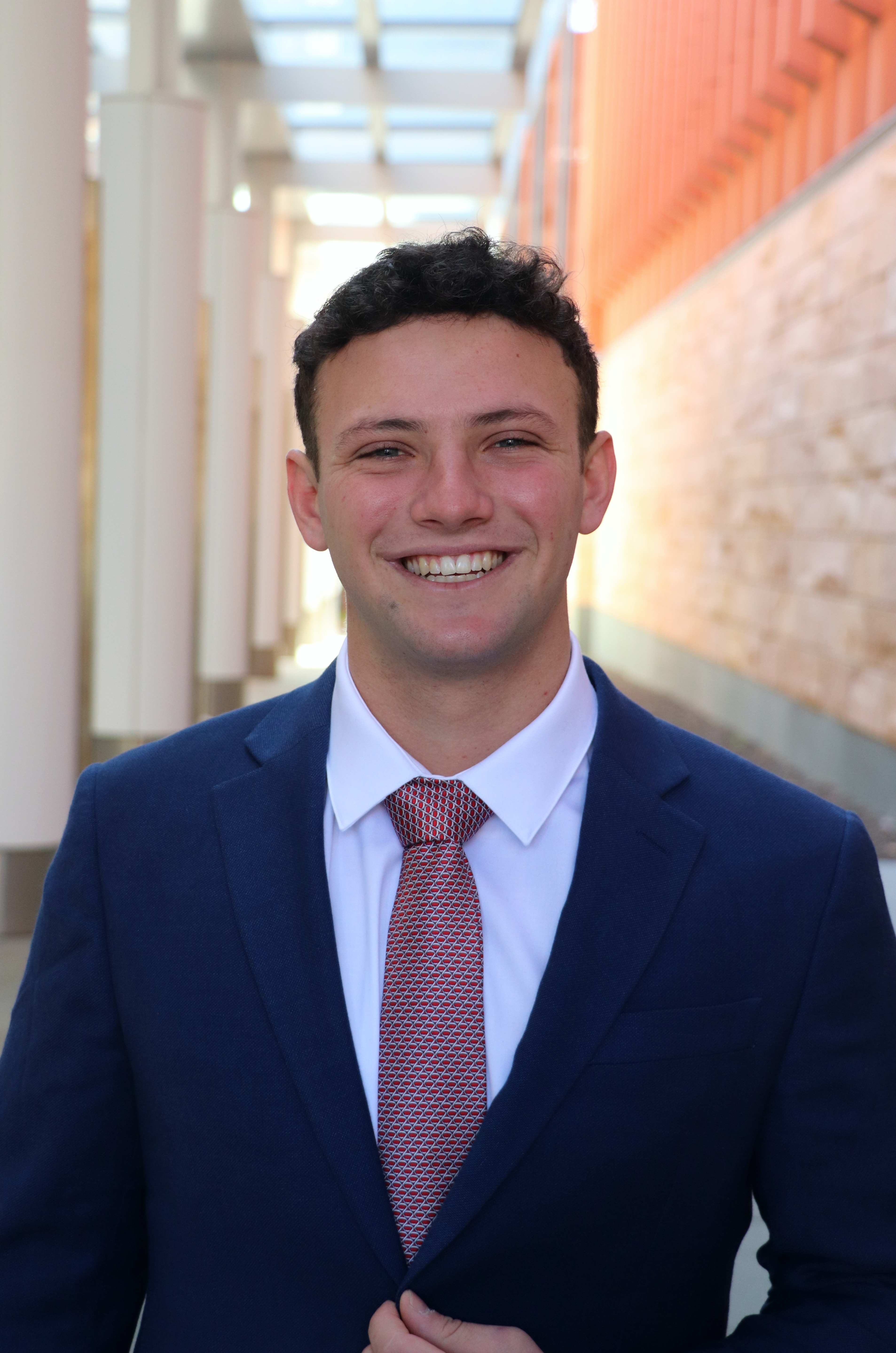 Adam is an analyst at SeeCares. He closely follows market trends and data to help guide commercial real estate lenders and borrowers.